“So we do not lose heart. Even though out outer nature is wasting away, our inner nature is being renewed day by day. . . . For we know that if the earthly tent we live in is destroyed, we have a building from God, a house not made with hands, eternal in the heavens.” (2 Cor 4:16; 5:1)

Cracks in the Wall

“There are cracks in the wall,” my son reported in his distress.

“There are now more cracks in the wall,” he says in his alarm.

The house was refinished, with new plaster and fresh paint, new walls and fixtures,

An attractive little house, a bright new home for a new married couple,

A place for dreams to grow, for a family to live beneath its great, sprawling tree.

But now cracks have begun to appear on the pristine newness of freshly plastered walls,

Cracks that come out of nowhere and grow with disquieting unpredictability.

Reaching down deep into the unseen caverns of the soul.

Are these mere cracks in the wall, one asks—superficial and harmless, nothing to worry about?

Or—dread the thought!–do they appear as signs of a deeper, more dangerous flaw?

Could these cracks turn a happy dream into a nightmare of regret?

“Cracks in the wall” are so distressing because they are so visible.

They stubbornly insist on being seen—they cannot be wished away.

Their existence cannot be denied or ignored—they are there!

They are vexing because they lay outside one’s control,

Possessing a life of their own, appearing and growing at will,

“Cracks in the wall” are usually benign—thank God!

But it is the knowledge that catastrophe is also possible

—that cracks can widen into crevices and chasms—

that keeps one forever wary,

Houses have collapsed. Worlds have fallen apart. Calamity has overtaken.

I sometimes become alarmed at new “cracks in my wall” when looking in the mirror.

Is that just a blemish before me, or it is evidence of something more sinister,

evidence of a hidden and catastrophic flaw?

Every new report of someone dying in their 60s is like a tremor,

causing me to check for new cracks in my wall,

Every new ache and pain,

A potential symptom of approaching mortality.

“Cracks in the wall” are always unsettling,

Still . . . I realize that there will always be cracks in the wall.

Cracks of climate-change in the delicate ecosystem of our planet.

Cracks from terrorist acts that shake the stately buildings of western culture,

Cracks in families and marriages, breaking hearts and wounding spirits.

a sensitive instrument that registers even the slightest tremor.

Sometimes a crack opens up beneath my feet in the ground of my being,

a fissure between a secular age and Christian faith,

a canyon so wide and so deep that I fear that I shall become stranded on one side or the other,

perhaps swept away to an island of despair,

cut off from that bright and secure land of Israel’s scriptures,

unable to live in that house built on the rock and that stands through wind and storm.

I am beginning to understand that there will always be cracks in the wall,

And that they teach me that this home is not my permanent residence,

that it is but a temporary dwelling.

I need to keep seeing those cracks,

so that I may be educated about the nature of this life.

Seeing those cracks, though annoying,

remind me time and again that this place is transient,

only a resting spot on my journey,

only a tent on a camp site,

Not a mansion on a vast estate. 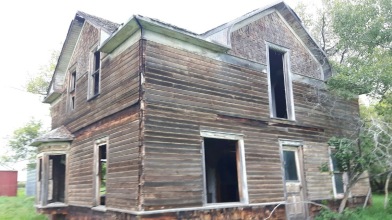 “By faith [Abraham] stayed for a time in the land he had been promised, as in a foreign land, living in tents. . . . For he looked forward to the city that has foundations, whose architect and builder is God.” (Hebrews 11:9-10)

“But you have come to Mount Zion and to the city of the living God, the heavenly Jerusalem.”    (Hebrews 12:22)