I remember exactly how it felt to walk outside into a glorious spring day like the one in the photograph. The sun felt warm on my face and body. The air was fresh and fragrant with the scent of soil and vegetation and farm animals. As I left the house I walked across the yard that was just beginning to turn green as the earth warmed from the strengthening rays of the sun. I could hear birds singing: sparrows, robins, crows, Canadian geese, blackbirds, magpies, and red-winged black birds. I could also hear the sound of frogs in nearby sloughs. The earth was coming alive.  And I felt happy to be alive.

What a glorious feeling to walk outside on such a morning! My brothers, Allen and Arthur, had left for school. I had had breakfast. And I had put on my shoes and was able to wear my spring jacket, the one that I am wearing in these photographs. I loved that jacket! I liked the way it made me feel special when I wore it.  It was red—though I think it may have been reversible, with the other color being blue. It had a white stripe running down each arm, and had white, metal snap buttons and stretchy, elastic cuffs. It felt sporty—even though it was a hand-me-down from one or both of my brothers, and showed signs of wear. I had put on the jacket in the porch where it hung on a clothes hook, along with my cap.  This little porch was on the east end of our house, next to the kitchen. It couldn’t have been more than about eight feet square.

I spent most of my time on such days exploring the farm yard by myself. I would explore the barn, perhaps, or climb up the haystack and look out over the countryside from my lofty vista, or maybe I would walk among the trees of our shelter belt. My common companion on such explorations was our dog, Sport. When I walked about the yard or through the trees Sport was there at my side. When I stopped, Sport stopped too, and sat right beside me so that I could pet him. He showed his appreciation for such attention by licking his lips. I found it hard to stop because he was so appreciative! 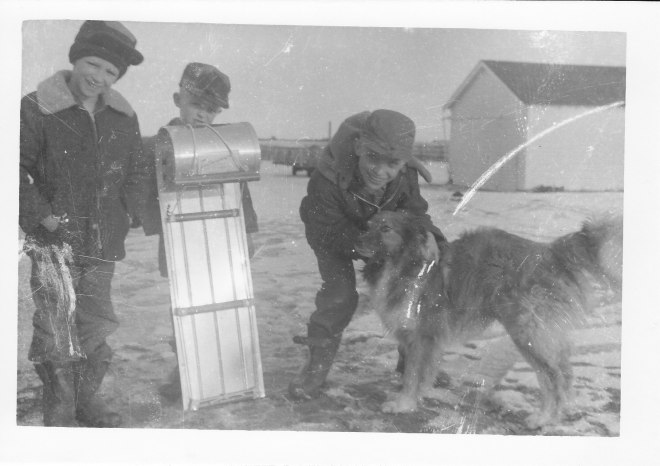 In the spring, Lois and I sit without a care in the warmth of the spring sun. We sit close to the place where a pile of hay sat against the south end of the slab fence. Each morning some hay would be pitchforked over the slab fence to some cattle below. There are remnants of this hay scattered on the ground where we are sitting. I can imagine that there would have been some lingering smell of this hay, and perhaps there was still hay in a little haystack not far from where we were sitting. About fifty feet or so to the right of us was the barn, a favorite place for exploration.

Our mother took these photographs of  my sister and me at home on the farm on a warm spring day in 1960, perhaps in April or May, when I was six and my sister, Lois, was one and a half. We are sitting here in the sun on a pile of lumber at the south-west corner of a slab fence that ran along two sides of the corral on the south end of our barn. In the photo we are facing west toward the house. The slab fence stood to the right of the barn (south).  Lois and I sat at the end the fence shown in this picture.

Mom saw me outside from the kitchen window and quickly brought out Lois along with her black-and-white camera to take our pictures. I wonder exactly when these photographs were taken. Grandma Johnson, my mom’s mom, died that same spring, May 11, 1960 (a Wednesday). I imagine that the pictures above were taken before this, but I can’t be certain. In any case, mom found joy in her children and would have found comfort in being a mother even as she lost her own mom. She once told me how when she was a little girl she couldn’t imagine losing her mom. The thought of losing one’s mother is inconceivable to a child. I’m sure it was still hard for mom as an adult to learn that her mom had died. It happened less than a week before mom’s forty-fifth birthday (May 16, 1960). But mom’s sorrow was surely balanced by her joy at having children of her own. So as I look at these black-and-white photographs I also think of the one taking the pictures, my mother.

I have a specific memory from this time. It is about walking out our driveway and onto the road leading to Beda’s house (Beda Johnson). Mom and I walked over to Beda’s house so that we could watch the royal wedding of Princess Margaret that took place on May 6, 1960. This was the first ever televised royal wedding; over twenty million people watched it. It was a Friday. I have a distinct memory of this, of walking to Beda’s house, and of sitting in her tiny living room while we watched her black and white television. We didn’t get a television until just before Christmas 1963, so it was quite a treat to be able to watch television. Mom told me in recent years when I relayed this memory to her that she was sad that she wasn’t home that day because it was the last time that grandma was at our house. I had no memory of this. I imagine that grandma was at home babysitting Lois, while mom and I went to Beda’s to watch the wedding.

Life was simpler back then.  Jesus invites us to become like a little child.  When responsibilities and worries crowd my thoughts, I like to revist these happy places in my mind and imagine the wholeness I felt on those warm spring days in 1960.