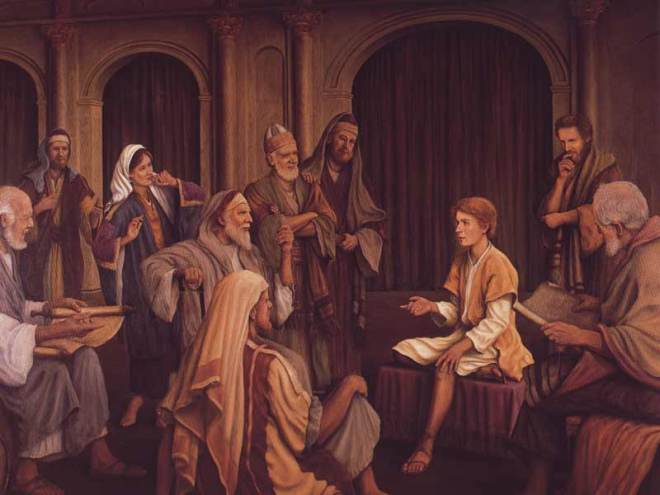 “No greater joy can I have than this, to hear that my children follow the truth” (3 John 1:4).  Jesus was celebrated by his extended family.  Mary and Joseph vividly remembered the visitation of the shepherds, angels and wisemen as Jesus grew up.  Twelve years later, when they took him to Jerusalem, he became engrossed in his conversation with the Jewish teachers in the temple.  His focus switched from his immediate family to the whole world.  His heavenly father took precedence over his earthly parents, even when it meant going a different path than one they may have imagined for him.

Every year [Jesus’s] parents went to Jerusalem for the Feast of the Passover.  When he was twelve years old, they went up to the Feast, according to the custom.  After the Feast was over, while his parents were returning home, the boy Jesus stayed behind in Jerusalem, but they were unaware of it.  Thinking he was in their company, they traveled on for a day.  Then they began looking for him among their relatives and friends.  When they did not find him, they went back to Jerusalem to look for him.  After three days they found him in the temple courts, sitting among the teachers, listening to them and asking them questions.  Everyone who heard him was amazed at his understanding and his answers.  When his parents saw him, they were astonished  His mother said to him, “Son, why have you treated us like this?  You father and I have been anxiously searching for you.”  “Why were you searching for me? He asked.  “Didn’t you know I had to be in my Father’s house?”  But they did not understand what he was saying to them. Then he went down to Nazareth with them and was obedient to them.  But his mother treasured all these things in her heart.  And Jesus grew in wisdom and stature, and in favor with God and men.

When a child is born it carries all the hopes and expectations of the parents and grandparents.  Having done nothing, the baby is perfect in every way, resembling the best features of both sides of the family.  And then reality sets in.  The child grows and goes through an awkward stage; they begin to push back and some of the less than attractive traits of the “other side” of the family come through.  If the teenager manages to make it through school and graduates, the parents can once again renew their hopes, and remember their initial joy.

Children are not raised in isolation.  Even if it looks like they are part of a nuclear family with a mother and/or father, during holidays and birthdays, others come and celebrate the life.  Jesus was no different.  When he turned twelve, the family went to Jerusalem for the Passover.  It appears that they went together as a group, and as such Jesus could be found with his cousins and friends.  It took them three days to realize he was missing and by then everyone was frantic.  When they finally found him in the temple with the teachers of the law, he didn’t apologize, rather he reminded him that he had to be “about his father’s business.”  He was conscious of his ministry by the age of twelve.  His loyalty switched from his earthy parents to God.  Mary must have been reminded of the circumstances surrounding his birth.  Did she realize when he was born that she would lose him so quickly?

The joy was turned to sorrow on the cross.  No one mourned his loss more deeply than his mother; one of the only people who stayed with him to the end.  How confusing it must have been to see the promised Messiah, her son, crucified as a criminal.  Where was the promise?  Hope had died.  Her family was destroyed.  But God had a bigger purpose, and on the third day, when he arose, her joy was unbounded.  So it is with our family.  We empathize with our children, but we cannot live their lives for them.  We must believe that they have been entrusted to us for a few short years to shape and mold; then we release them into God’s care, trusting that ”He who began the good work will be faithful to complete it” ((Phil.1:6).

” Lord, we are only caretakers of our children.  As part of an extended family, we want the best for our loved ones and share in their joys and sorrows.  Help us to be faithful to uphold them and pray for them so that your good work may be done in their lives.” Amen