“Take us the foxes, the little foxes, that spoil the vines: for our vines have tender grapes..”
Song of Solomon 2:15

Sin is seductive and deceptive.  Few would fall to felonies such as murder, rape, kidnapping, arson, or fraud, but our readings for today let us know that it is the “little sins” that can destroy our faith. Before it has a chance to produce fruit, the little foxes eat the fresh shoots in the vineyard.  So too, the sins we excuse can easily separate us from God, keeping us from enjoying the fullness of peace.

28 Furthermore, just as they did not think it worthwhile to retain the knowledge of God, so God gave them over to a depraved mind, so that they do what ought not to be done. 29 They have become filled with every kind of wickedness, evil, greed and depravity. They are full of envy, murder, strife, deceit and malice. They are gossips, 30 slanderers, God-haters, insolent, arrogant and boastful; they invent ways of doing evil; they disobey their parents; 31 they have no understanding, no fidelity, no love, no mercy.

12 So they asked him, “Who is this fellow who told you to pick it up and walk?”

13 The man who was healed had no idea who it was, for Jesus had slipped away into the crowd that was there. 14 Later Jesus found him at the temple and said to him, “See, you are well again. Stop sinning or something worse may happen to you.” 15 The man went away and told the Jewish leaders that it was Jesus who had made him well. 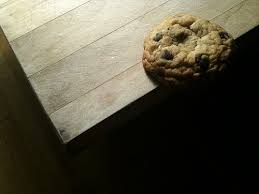 My mother used to bake on Saturday mornings when I was growing up.  While I appreciated the smell and delicious taste of melted butter on hot bread and rolls, my downfall was the chocolate chip cookies. Somehow, knowing that they were for my lunch the following week didn’t detour me from sneaking one or two while they were still hot and cooling on the counter.  I was scolded for the practice, and I promised that I wouldn’t take any, but inevitably I fell to temptation.  I learned to divert blame by accusing my younger siblings, so to the stealing I added lies.

It’s easy to excuse these little indiscretions as harmless antics of children, but it goes to the heart of integrity.  How much do we excuse in ourselves?  The lame man was warned to “stop sinning” after he was healed, “or something worse may happen.”  The list of sins that result in death, described in Romans 1, includes gossip, slander, insolence, arrogance and pride.  These seemingly innocent sins form habits that are destructive of our character and become “ugly” attitudes.  People watch us, and if we claim to be a Christian while speaking ill of another person, it is a reflection on our faith and cheapens the message.  It also keeps us from demonstrating the fruits of the spirit—love, joy, peace, patience, kindness, goodness, gentleness, and self-control.  We are to be above reproach.

With such a high standard, it may be easy to give up entirely and say, “who then can be saved?”  Perhaps that’s the point of the discussion—no one is righteous, not even the “nice” people of the world.  So, before we judge the felon, we need to look at our own hearts and realize that the ground at the foot of the cross is level.

Lord, we easily excuse our faults and hurtful attitudes while judging others. Forgive us for cheapening your grace by the way we continue in our sin.  We cannot change ourselves; we come to the cross for forgiveness.  Help us surrender our “harmless” sins.  Amen.