“He grew strong in his faith as he gave glory to God, being fully convinced that God was able to do what he had promised.” Rom. 4:21

Abraham tried to fulfill God’s promises on his own by taking a concubine and fathering a son.  But God had another way—he would make him a great nation through his wife Sarah.  As the years passed Abraham continued to believe even though there was no evidence that the promise would be fulfilled.  Finally, when both he and Sarah were too old, GOD produced a child in her womb.  Abraham is the father of faith because he believed that God was able to do what he promised, despite evidence on the contrary.

37 On the last day of the festival, the great day, while Jesus was standing there, he cried out, “Let anyone who is thirsty come to me, 38 and let the one who believes in me drink. As the scripture has said, ‘Out of the believer’s heart shall flow rivers of living water.’

16 For this reason it depends on faith, in order that the promise may rest on grace and be guaranteed to all his descendants, not only to the adherents of the law but also to those who share the faith of Abraham (for he is the father of all of us, 17 as it is written, “I have made you the father of many nations”)—in the presence of the God in whom he believed, who gives life to the dead and calls into existence the things that do not exist. 18 Hoping against hope, he believed that he would become “the father of many nations,” according to what was said, “So numerous shall your descendants be.” 19 He did not weaken in faith when he considered his own body, which was already as good as dead (for he was about a hundred years old), or when he considered the barrenness of Sarah’s womb. 20 No distrust made him waver concerning the promise of God, but he grew strong in his faith as he gave glory to God, 21 being fully convinced that God was able to do what he had promised. 22 Therefore his faith “was reckoned to him as righteousness.” 23 Now the words, “it was reckoned to him,” were written not for his sake alone, 24 but for ours also. It will be reckoned to us who believe in him who raised Jesus our Lord from the dead, 25 who was handed over to death for our trespasses and was raised for our justification. 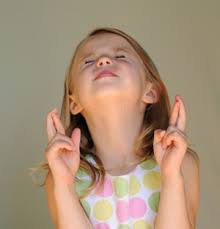 We blow out our birthday candles and make a wish on falling stars.  Lottery tickets are purchased for a chance on a dream; athletes perform game day rituals, and we wish people “good luck” when they are meeting the unknown.  These are vain hopes if we are dependent on the “universe” to reward our requests.  If our dreams come true, it is a result of hard work, random chance or beating the odds.  The universe doesn’t reward us or need our thanks—it is part of creation and has no power.

Abraham believed that he would be the father of many nations even though his wife was past child bearing age and he was over 100 years old.  He knew that God had given his word, and that was enough.  He did not have faith in his own ability to produce a child—all efforts had failed, but rather he continued to believe in the God who could create something out of nothing and raise the dead.

Jesus was there from the creation of the universe and his promises are guaranteed.  When he says, “Let anyone who is thirsty come to me,” he’s there to listen and satisfy that thirst.  In the same way, when we confess our sins, we know that they are forgiven, not because we “forgive ourselves”, but because God forgave us when Jesus died on the cross.  We are assured that there is life after death, not because we want it to be so, but because Jesus rose from the dead and he promised believers eternal life.  “If it were not so I would have told you.”  We have faith because we trust the one who makes the promise and he cannot lie.  “To one who has faith, no explanation is necessary. To one without faith, no explanation is possible.” (Thomas Aquinas).

Lord, we have wants and desires that only you can fill.  Yet, we try, by our own effort to meet all our needs.  When it comes to forgiveness, peace of mind, and hope for the future, only you can give us the assurance we need.  We come to you with meager faith and ask you to teach us to trust in the God who brings something out of nothing and raises the dead.  Amen.